That would be an unbelievable feat in itself, but in addition they won the equally illustrious British Open shield against equally strong opposition to make them “double champions.”

The band will now represent the country in the European Championships next year in Germany so the Jägers had best take their lederhosen with them!

Here they are, celebrating their wins!!! 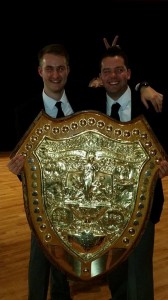 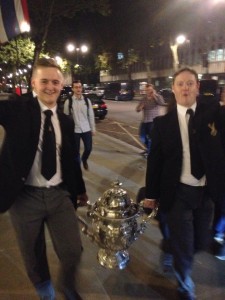 The Jäger Maestros performed to a capacity crowd at Manchester’s Bierkeller on Friday 3rd October to open Oktoberfest for the city’s revellers.

Entertaining the Manchester crowd with German oompah music, modern classics and drinking games, the band welcomed in the famous traditional German drinking festival that is famous around the world.

“Considering most of the major cities across the world are starting Oktoberfest tonight, it’s fantastic that we are here at Manchester’s number one Bavarian venue to introduce the festival in our home town.” said Neale Hobson on behalf of the Jäger Maestros.

The band will close the festival in the same epic style that they opened it on Friday 31st October. Bring your steins and Halloween costumes!

Paul Duffy, the Jäger Maestro’s trumpet player, has spent the last 11 months writing and recording solos for his first album, out this week, which already has plaudits around the world gushing over it.

The album, Only just begun, features Paul expertly performing, not only on trumpet but on a gargantuan 30 instruments and even singing! At one point , Paul himself plays every instrument in the brass band to accompany his own solo on trumpet.

Speaking about the CD, Paul said, “This has been so much fun to make. I’ve loved the challenge of doing something totally  new and innovative.”

To have Paul Duffy in the Jäger Maestros is a huge privilege and this CD will no doubt rocket him into superstardom.

If you wish to order Only Just Begun, please visit Paul’s website at http://www.padusic.com 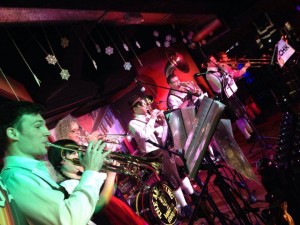 "There wasn't a person in the room who wasn't full of praise for the brilliant Jäger Maestros. Members at the Todmorden Hippodrome were in for a treat for their annual end of season party, now dubbed as "the best one ever". Within a couple of minutes, the Jäger Maestros had everyone laughing, dancing and having a great time. From young to old(er) the band appeal to everyone with their comedy and fantastic music. The people at the Hippodrome thoroughly enjoyed their night and would highly recommend them to anyone wanting a good time."